Lucas Davenport Up Against an Art History Professor 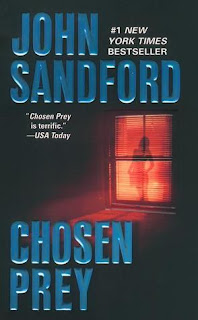 The twelfth entry in John Sandford's acclaimed Prey series finds the world of the protagonist, Lucas Davenport, undergoing some major changes. His boss, Police Chief Rose Marie Roux, is about to lose her job since the mayor who appointed her is leaving office. This means, in turn, that Davenport will almost certainly lose his job as Assistant Chief as well.

At the same time, Lucas's girlfriend, Weather Karkinnen, has decided that it's time for them to make a baby. Weather has been alienated from Lucas for a long while because of an incident that occurred at the end of a previous book, but now she's back. This does not mean that Weather has decided that she would like to be engaged to Davenport again, but her biological clock is ticking and she does need someone to father the child...

In the midst of all this, a young woman's decomposing body is discovered partially buried on a rural hillside. She's been missing for about a year, and there is virtually no evidence suggesting who her killer might have been. As Davenport attempts to untangle the mystery, a rural Wisconsin marshal appears with a file he's been keeping on missing young women who have disappeared much like Davenport's victim. One of the missing women is the marshal's niece and Lucas suddenly realizes that he may have a serial killer on his hands.

He does, of course, and Lucas rallies his usual team and sends them into action. The killer is a professor of art history named James Qatar. (This gives nothing away; as is almost always in the case in these books, the reader meets the killer before Davenport even appears on the scene.) Qatar has some particularly sick fantasies that he is acting out and is capable of some pretty unsettling violence. But he's also unusually clever and lucky, and Davenport will have to draw upon all of his legendary skills if he's going to run Qatar to ground.

I enjoyed this book a lot. As always, the banter is great; it's fun to watch Weather mess with Lucas, both mentally and physically; the pace is good, and the payoff at the end is rewarding. If I have any complaint about the book (and it's a small one), it's that I didn't think that James Qatar was in the same league as many of the other antagonists in this series.

The quality of these books almost always depends on the quality of the villain as well as that of the hero, Davenport. Sandford is capable of creating some truly nasty and memorable adversaries for Lucas, and to my mind, Qatar is not among the better of them. But then, Sandford did give us a fantastic character in Clara Rinker, who appears in two of the Prey books, and so I'm perfectly happy to forgive him if he can't measure up to that level of perfection every time out of the gate. An easy four stars for this one.
Posted by James L. Thane at 1:59 PM