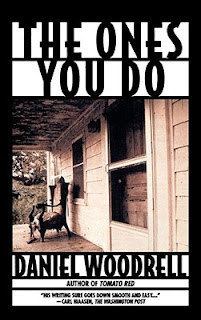 This is the third and final entry in Daniel Woodrell's Bayou Trilogy featuring St. Bruno, Louisiana police detective Rene Shade. In this book, though, Rene has been suspended from the department and appears only occasionally. The main protagonist is actually Rene's father, John X. Shade, a pool hustler who had abandoned the family years earlier.

John is now well into his sixties and living in Mobile, Alabama. His vision is getting blurry; he's got the shakes, and his days of making serious money as a pool sharp are well behind him. He's reduced to working at a rib joint to support himself, his new much younger wife, and their very precocious ten-year-old daughter, Etta.

John's wife, Randi, "The 'Bama Butterfly," is an aspiring singer, and as the book opens, she's decided to pursue her destiny in Europe where she feels that her talent will be more appreciated. She leaves Etta behind to deliver a note to John informing him of the situation.

To make matters worse, Randi finances her trip by stealing $47,000 from the safe of John's boss, a five-foot, six-inch psychopath named Lunch Pumphery. Lunch is totally nuts and Shade knows that Lunch will hold him responsible for the money. Shade figures that the only sensible thing to do, then, is to whack Lunch over the head a couple of times with a bottle of Maker's Mark, gather up Etta and hit the road.

Shade decides to return to his old home in St. Bruno where he was once the most handsome man in town, for a reunion with his three sons, Rene among them. Lunch Pumphrey is in hot pursuit, and things are bound to get dicey.

This is a hugely entertaining read with engaging characters, great dialogue and interesting observations about family ties and Cajun life. The daughter, Etta, is brilliantly conceived and steals virtually every scene in which she appears. Given the lifestyle of her parents she's obviously old beyond her years and is curious about a great many things. She wonders, for example, "what would've happened if they hadn't killed Christ for our sins? I mean, if instead they'd just dragged Him out back and slapped Him around some?"

Daniel Woodrell is obviously incapable of writing a bad book and it's hard to imagine anyone who wouldn't enjoy this one.
Posted by James L. Thane at 12:27 PM