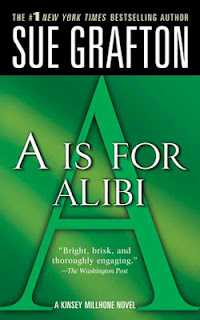 This is the book that introduced Kinsey Millhone and helped inaugurate a new era in crime fiction when female investigators like Millhone and Sara Paretsky's V. I. Warshawski could go toe-to-toe with the bad guys and more than hold their own with their male counterparts like Spenser, Sam Spade and Philip Marlowe.


Millhone has a modest solo practice as a P.I. that she runs out of a small office in the fictional town of Santa Teresa, California. Orphaned as a child and twice divorced, she lives a quiet, solitary life, eschewing the kinds of possessions and personal connections that most people take for granted. But this is her life and she's perfectly happy with it. Certainly she would never be mistaken for Miss Marple or Jessica Fletcher. And unlike any number of other female sleuths, she is perfectly capable of solving difficult mysteries without the assistance of a cat.

Enter Nikki Fife, recently released after an eight-year stint in prison for murdering her husband. One might wonder why Nikki got only eight years for a premeditated murder, but this is never explained. Nikki continues to insist that she was innocent and she hires Kinsey to find the Real Killer.

The husband, Laurence Fife, was a philandering attorney with a loose moral code who had antagonized any number of potential suspects. But the police and prosecutors argued that only Nikki could have poisoned one of Laurence's allergy capsules and she was thus convicted on this rather flimsy evidence.

Kinsey takes the case and almost immediately discovers that there was a lot more going on in the case than the police and prosecutors revealed at the time of the trial. To make matters worse, as soon as Millhone begins poking around, people with ties to the case start turning up dead, and before long, Kinsey may find herself in the line of fire.

This is a good introduction to a series that would develop very long legs and attract a huge fan base. Thirty years after the publication of "A" Is for Alibi, Kinsey Millhone still soldiers on and Grafton has nearly reached the end of the alphabet. Some have questioned Grafton's decision to leave her protagonist and these stories glued to the 1980s, and the books have become, as a practical matter, historical crime novels in which there are still no personal computers, cell phones or Internet and where the heroine remains perpetually in her middle thirties. But Grafton has attracted legions of fans to the series, so she must be doing something right. And certainly any fan of crime fiction should be at least marginally acquainted with Kinsey Millhone.
Posted by James L. Thane at 11:32 AM