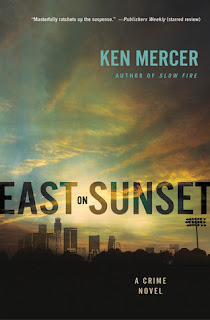 
Readers first met Will in Slow Fire, Ken Mercer's excellent debut novel. At the time, Will was a disgraced former L.A. cop who had lost his wife along with his job and who had also suffered a horrible personal tragedy. With no other prospects, Will accepted an offer that came from out of the blue to be the police chief in Haydenville, a small town in northern California. To all outward appearances, Haydenville appeared to be an idyllic spot, but Will soon discovered that the little town was in the grip of a plague and that its well-being was threatened by some very unsavory characters.

By the end of Slow Fire, Will had largely straightened out the problems in Haydenville, and in East on Sunset: A Crime Novel, we find him back in L.A. and no longer interested in a career in law enforcement. Instead, he is perfectly content to accept a job as a security officer for the L.A. Dodgers. Will and his estranged wife, Laurie have reunited; they have a nice new home, and it appears that life is finally working out for Will.

Enter Erik Crandall, whom Will busted years ago when he was still working undercover narcotics. Recently freed from prison, Crandall is determined to wreak revenge on Will. In particular, he believes that Will stole some $500,000 worth of drugs that belonged to Crandall and that never made it into the evidence locker when Magowan and his colleagues arrested Crandall.

Crandall arrives in L.A., tracks down Will and confronts him. Will knows that he didn't steal Crandall's drugs and points out the obvious: If Crandall had been arrested in possession of that much dope, instead of the relatively small amount that did reach the evidence locker, his sentence would have been much longer.

This sort of logic is totally lost on Crandall who has turned into a massive steroid freak and who is obsessed with the idea that Will has wronged him and that he must pay. Crandall threatens harm to Will and his wife, and when Will cannot get the police to take Crandall's threats seriously, he has no choice other than to deal with the threat himself. Will is thus forced to revisit a past he had long thought buried, and before long, Erik Crandall is not the only threat that Magowan will have to confront.

In this, his second outing, Ken Mercer has written another faced-paced novel with a very sympathetic protagnist. One feels for Will Magowan as the odds again seem to be stacked so heavily against him. And in Erik Crandall, Mercer has created a truly creepy and frightening antagonist who seems at times to be more than a match for Will.

One hopes that the next time around, Mercer will allow Magowan at least a bit of well-deserved peace and quiet, but based on the evidence of these first two books, Will probably shouldn't hold out much hope.