Two Masters in Their Formative Years 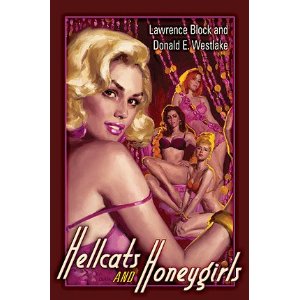 In the late 1950s, two young fledgling writers, Lawrence Block and Donald Westlake were learning their craft, writing articles and books, including soft-core sex novels that were published under a variety of pseudonyms. Their common link was the Scott Meredith Literary Agency where they met and became fast friends.
Early on in their friendship, they decided to try collaborating on a novel titled "A Girl Called Honey." The plan was that one of the two would write a chapter and ship it off to the other who would then write the next. They would alternate in this fashion until the book was done and they would then split the proceeds from the sale. They had no discussions at all about the characters, the plot, or the direction the book might take; they simply winged it, each writer working off of the developments that had occurred in the previous chapter. They enjoyed it so much that they ultimately collaborated on two similar projects, and the three books have been collected into this edition, with an introduction by Lawrence Block.
The first book, "A Girl Called Honey," describes the long slide of a lovely young Kentucky girl into the grip of prostitution and drug addiction. In the second, "So Willing," a teenager named Vince is determined to discover and deflower a virgin. Vince seems to have an awful lot of sex for a teenager in the early 1960s, but he discovers much to his sorrow that there are, apparently, no virgins left on the planet. In the third book, "Sin Hellcat," a New York advertising executive, trapped in a sexless marriage, reunites with a college girlfriend who is now a high class hooker. The two have a lot of great sex and a fantastic adventure as well. These books were doubtless considered to be pretty "racy" by the standards of their day, although they seem pretty tame now, and would hardly cause an eyebrow to be raised in most circles.
ellcats and Honeygirls is a book that will appeal mostly to ardent fans of Block and Westlake who would graduate from these humble beginnings to become two of the giants in crime fiction. Westlake, of course, is now deceased, but in the introduction, Block has written a very entertaining account of their friendship that is worth the price of the book all by itself.
The fun in reading these stories lies mostly in the fact that it is obvious that the two authors had an enormous amount of fun writing them. Particularly in the second and third books, they each tried to paint the other into a corner at the end of virtually every chapter. One can almost see either Block or Westlake gleefully ripping the last page of a chapter out of the typewriter and sending it off, rubbing his hands together wondering how the other would ever worm his way out of the situation just created.
I've read a fair number of Westlake's books, and through the years I've read virtually everything that Block has written and that is still in print, including his short stories and his articles on the craft of writing. I've long considered him to be one of the most entertaining writers around--I bet that even his grocery lists are fun--and I enjoyed very much the opportunity to read these books from his formative years as a writer.
Posted by James L. Thane at 1:07 PM