Trouble in Paradise: A Review of Ken Mercer's "Slow Fire" 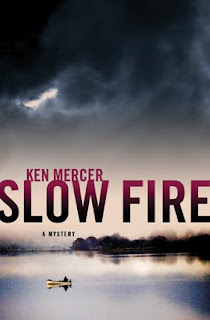 Will Magowan is an ex-cop who left the L.A.P.D. under a cloud and in the wake of an enormous personal tragedy. He’s unemployed, estranged from his wife, and reduced to living in a broken-down Airstream trailer when he receives a letter, offering him a job as the Chief of Police in Haydenville, California. Will is perplexed by the offer, especially since he hadn’t even applied for the job. But he has no other prospects and so accepts the call.

Haydenville is situated in a majestic national forest in the northern part of the state. But on arriving there, Will finds that the once-idyllic town is in the grip of a virtual plague that has plunged the community into nothing short of a death spiral. He also quickly discovers that he has very few allies, other than Thomas, his rookie deputy, who has no formal training whatsoever. Nonetheless, Will decides to stick it out, hoping that by attempting to resolve the town’s problems, he might also find some measure of personal redemption.

Will is only briefly on the job when he’s called to the scene of an apparent accident. A young woman has been found dead near a river, lying next to her overturned kayak. Will is troubled by what he finds, and refuses to agree with the conclusion that the victim died by accident.

Will fairly quickly discovers the source of the town’s difficulties and identifies his prime suspect. But in attempting to address the issue, he’s stymied at every turn. Even the mayor who hired him stubbornly refuses to cooperate and will not give any credence to Will’s well-founded suspicions.

The death of the young kayaker inaugurates a wave of horrific violence, and Magowan finds himself up against some genuinely creepy, malevolent and amoral villains. A lesser man would say the hell with it and leave Haydenville to the fate it probably deserves. But Will Magowan is not a lesser man. Against nearly insurmountable odds and in the face of grave danger to himself and the handful of people who support him, Will soldiers on, determined to redeem both himself and his newly adopted home town.

By naming his fictional town Haydenville, Mercer would appear to be paying an obvious homage to the film, High Noon, which was set in the town of Hadleyville, New Mexico. And Will Magowan’s struggle to save a small town that is threatened by grave danger and inhabited by an ungrateful and unsupportive population is, of course, strongly reminiscent of Marshall Will Kane’s efforts on behalf of his own small town.

The story of the flawed but ultimately virtuous outsider who rides into town and saves the day against overwhelming odds has long been a staple both of westerns and of crime fiction. But Ken Mercer provides a fresh take on the idea and creates strong, believable characters in a beautifully rendered setting. The plot moves swiftly. And even though the villain is identified fairly early on, the suspense builds to a great climax.

Slow Fire was another excellent First Mystery pick by the staff of The Poisoned Pen bookstore (http://www.poisonedpen.com/ ), and happily it is the first of a new series. With this book, Ken Mercer is off to a great start.