Another Hilarious Tale from Johnny Shaw 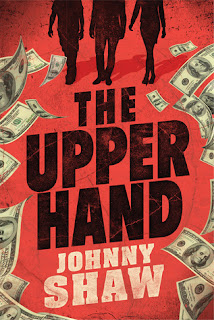 Johnny Shaw is a very, very funny guy, as anyone who has read his Jimmy Veeder "Fiascos" can attest. He was also the creator of the magazine Blood & Tacos, the first volume of which includes what remains one of the most hilarious short stories of all time, featuring Chingon, "The World's Deadliest Mexican."

Shaw's new book, The Upper Hand, features the Uckers, a dysfunctional family the likes of which you have never met. Two brothers and a sister--Axel, Kurt, and Gretchen--are the progeny of a thief who simply couldn't change his ways. When he died, fifteen years before the book opens, he left behind his three very young children and their mother who quickly went off the rails and turned to religion for her solace. In particular, she became enamored of a television evangelist named Brother Tobin Floom, whom she has watched religiously ever since (pun intended).

When he died, Dad also allegedly left behind a pile of loot from the last job he pulled, but it's never been found. Now, as the book opens, Mom dies, leaving her children adrift in the world, but not before leaving her home and all of her money to the Reverend Floom.

At this darkest moment, "Mother" Ucker, an aunt that the children never knew, suddenly appears on the scene. Their mother had closed off any contact with their father's family because they were all a bunch of swindlers and cheats, but it turns out that Axel, Gretchen and Kurt have a fairly large, if hugely disreputable, extended family. Even more shockingly, "Mother" announces that the Reverend Floom is actually their grandfather and has managed to cheat them out of their inheritance!

"Mother" invites the three Ucker children into a scheme to fleece the not-so-good Reverend and get their inheritance back. The three agree and at that point, the story dissolves into one of the funniest caper novels I've ever read. All of the characters are inspired and could only have come from a mind as profoundly warped as Johnny Shaw's; the plot is pure pandemonium, and the soundtrack is provided by Skinripper, the worst metal band you fortunately never heard.

As much as I've enjoyed his earlier work, this may be Shaw's best. I literally laughed out loud at virtually every scene and the entire enterprise left me shaking my head in amazement. I can hardly wait to see what the author does next.