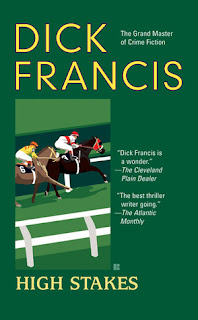 I would argue that this is one of the best books in the Dick Francis catalog. The protagonist, Steven Scott, is somewhat unusual for a Dick Francis novel in that he is a relatively wealthy man who made a fortune designing a very popular line of children's toys. As a sideline, he has bought a number of race horses, even though he knows next to nothing about horses.

Scott entrusts the horses to the care of a trainer named Jody Leeds, and the horses enjoy some success at the races. But after some time has passed, Scott realizes that Leeds has been defrauding him in a fairly significant way. The fraud is clever enought that Scott can't actually prove the offense but he confronts Leeds and informs him that he is removing his horses from Leeds and taking them to another trainer. Leeds has expanded his operation at some expense to accommodate Scott's horses and explodes at the thought that Scott is going to leave him high and dry. In fairly short order, violence and other chicanery will ensue.

While the law will be no help in this case, Scott is determined to protect his interests as best he can. He thus concocts a scheme that will have to move as flawlessly as the gears in the toys he has invented in the hope of righting the wrongs that have been done against him. It's a very clever plot with a lot of the usual Francis touches, and it's a lot of fun watching it unfold. Again, one of the best of the novels from Dick Francis.