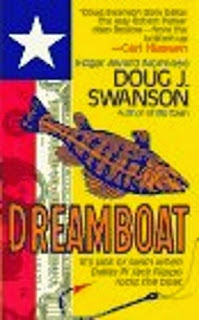 When Dallas P.I. Jack Flippo snips the pony tail off the head of his ex-wife's dopy new boyfriend, he earns himself a trip to jail. Once released on bail, he's hired to do a death investigation for an insurance company. Only a few months earlier the company had written a partner's insurance policy for the owners of a somewhat less-than-high class watering hole called the Melon Patch. Now one of the owners has drowned in an alleged boating accident and the survivor, a country singer wannabe named Rex Echols, has his hand out looking for the $500,000 death benefit from the policy.

The death occurred in the tiny town of Baggett where the sheriff, who's a pal of Rex Echols, is enamored of a waitress/stripper with the improbable name of April Showers who works at the Melon Patch. Jack arrives in town to discover that the coroner only took one photo of the body as it lay face down on the dock after being recovered. The sheriff has signed off on a declaration of accidental death, and the body has been cremated, courtesy of the surviving partner, who claims it was the least he could do for the victim and his grieving family.

Jack would like to talk to the victim's family, but Echols claims that they live somewhere way off in Arkansas and that they're too impoverished to have come to the memorial service in Texas. And, sadly, Echols seems to have lost the phone number of the poor boy's mamma.

The insurance company is ready to write the whole thing off and pay the claim because to them, the $500,000 is small potatoes. (You'd never hear Mr. Keyes saying that in Double Indemnity!!!) But Jack won't let go of the case, and the deeper he probes, the more trouble he's in.

This is another very entertaining entry in this relatively short series. It's a lot of fun hanging out with Jack Flippo, and Swanson creates a great cast of auxiliary characters. Most readers probably won't want to put Baggett, Texas on their list of prime vacation destinations, but they'll be happy enough to visit there in the company of this smart-ass and engaging P.I.
Posted by James L. Thane at 4:22 PM