Lucas Davenport Is on the Hunt in a Field of Prey 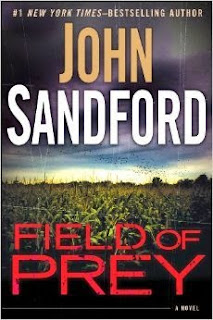 Two high school kids are parked out in a field near Redwing, Minnesota, enjoying an evening of youthful passion, when they notice a very bad smell coming from somewhere nearby. The boy, being the responsible sort, tells a deputy sheriff and the next day he and the deputy go back to the spot and discover a concealed cistern. When they pry the cover off, they discover that the cistern is filled with decaying female bodies.

The local authorities begin pulling the bodies from the cistern and quickly realize that this is a job for the state Bureau of Criminal Apprehension. Lucas Davenport races to the scene and by the time he arrives, parts of fifteen bodies have been brought to the surface.

There are still more to come, and it soon becomes apparent that the bodies have been deposited over a long period of time. The victims are all young, blonde, busty women from a broad area around the field where their bodies are discovered. Most of them disappeared after being out for a night of drinking and were never seen again.

Lucas realizes that a very clever killer is at work here. The assumption is that he's a local man, but no one has any idea who it might be, let alone how he could possibly have gotten away with this behavior for so many years and right under their noses.

The reader knows fairly quickly who is responsible for these murders and it becomes a question of how many more victims will be claimed before Davenport, the BCA and the local authorities can bring him down. Most of Lucas's regular team members are off on other investigations and so Lucas is effectively teamed up with a sheriff's investigator named Catrin Mattson. It's an interesting combination, and even though most of the usual "Prey" characters are not available, there's still a lot of great banter and wry humor even in the midst of a case so horrible.

The tension ratchets up dramatically when the killer decides to target members of the investigating team and this fast-paced thriller gathers even more steam. All in all, it's another great ride from John Sandford that will leave readers waiting impatiently for the next Prey novel.
Posted by James L. Thane at 12:26 PM