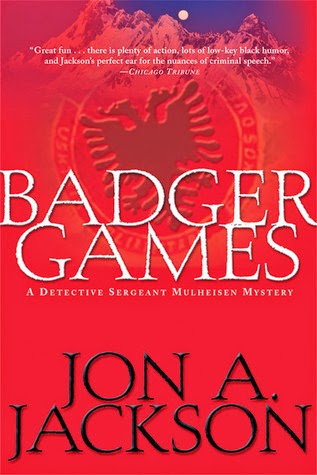 This is the ninth and penultimate book in Jon A. Jackson's excellent series featuring Detroit homicide detective "Fang" Mulheisen. Oddly, though, Mulheisen does not appear at all in this book, save for being mentioned by name a couple of times. Rather, the main protagonist in this entry is Mulheisen's long-time nemesis, Joe Service.

Service first appeared in the series as a troubleshooter/consultant who was employed by the mob to deal with problems that the mobsters couldn't deal with in-house. In the course of his activities in Detroit, Service and "Mul" crossed paths on a number of occasions.

At one point, Mulheisen finally caught up with Service and arrested him. At the time, though, Service had been badly injured and so was being held in custody in a hospital. For reasons far too complicated to explain here, Joe attracted the attention of a group of rogue government figures who were employed by the CIA and other such agencies. Upset by the way the bureaucracy often frustrated their efforts to achieve justice, these agents formed a group called the Lucani, and began administering "justice" to various miscreants as they saw fit. The Lucani determined that Joe might be useful to them for a specific mission and so helped him escape custody with the provision that he would "consult" with them on a case.

Now the Lucani have lost track of one of their members, a shadowy figure known only as Franko. When last seen, Franko was undercover in Serbia, investigating a group of drug smugglers. But then the conflict in that part of the world heated up and Frank disappeared. The Lucani have intelligence suggesting that Franko managed to escape and make his way to Butte, Montana, which has a small Serbian population. They very much want to talk to him and so commission Service and his lover, Helen Sedlacek, who also has ties to the Serbian community, to go to Montana and track Franko down.

Joe and Helen had lived briefly in the Butte area, and, like any sensible person, Joe is anxious to get back to Montana. The hunt for Franko seems a good excuse, even though it will be like looking for the proverbial needle in a haystack.

What follows is a very entertaining adventure populated by a lot of colorful characters. There are a number of twists and turns, and Joe and Helen have no idea who they can really trust outside of each other. It turns out that several other people are also desperately seeking Franko, including a nasty Serbian war criminal nicknamed The Badger. When all of these people wind up in Montana at the same time, the result is a great climax with lots of action, wry humor and playful sex. This is a book will surely appeal to a wide variety of readers, even if it is a "Fang" Mulheisen book sans Mulheisen.
Posted by James L. Thane at 12:10 PM