Spring in the 87th Precinct... 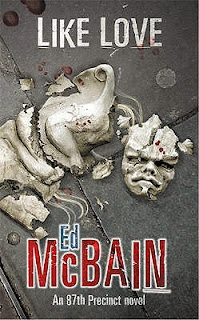 Spring finds the detectives of the 87th Precinct busy as usual. As the book opens, Detective Steve Carella has to deal with a beautiful young woman who decides she has nothing to live for and who has climbed out onto a ledge high above the street in her nightgown. She's ready to jump and in 1962, the PD doesn't yet have trained specialists to deal with a situation like this. Carella will do the best he can, but this really isn't his area of expertise.

Meanwhile, a hairbrush salesman is making his rounds. (Remember, it's 1962 when people other than the Girl Scouts apparently still sold things door-to-door.) The unsuspecting salesman rings the doorbell at an apartment which, unfortunately is filled with leaking natural gas. The electrical impulse from the bell touches off an explosion which blows the salesman and his hairbrushes all to hell.

When the dust settles, the police discover a man and a woman lying virtually naked in the bedroom dead from inhaling the gas. They also find a couple of empty Scotch bottles and a suicide note. But something seems off and most of the detectives believe that the deaths were really homicides.

Sadly, their investigation leads them nowhere. They discover some quirky facts about the case but nothing that absolutely disproves the apparent suicide and nothing that points the finger at a viable suspect. In the meantime, some unknown person has made it his hobby to periodically kick the crap out of Steve Carella, which does nothing to improve the detective's disposition. And unless the detectives catch a break soon, it appears that none of this will be resolved to anyone's satisfaction.

This is another very good entry in this series. As always, it's a pretty quick read and fans of the series are certain to enjoy it.
Posted by James L. Thane at 5:50 PM