An Excellent-Depression-Era Novel by the Under-Appreciated James Ross 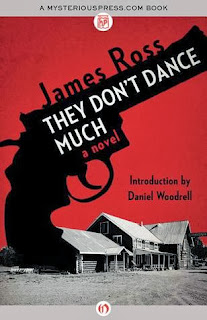 This Depression-era novel quickly sank from view when it was first published in 1940. A new edition was released in 1975, with an introduction by George V. Higgins, a crime novelist who was then at the peak of his career. But even with his endorsement, the book was still little-noticed. Perhaps the third time will be the charm and the book has now been re-released with an introduction by Daniel Woodrell, a great writer perhaps best known for his book, Winter's Bone.

The main protagonist is a North Carolina farmer named Jack McDonald. Jack is about as down on his luck as any man can get in the middle of the 1930s. The Boll weevils have destroyed his cotton; he can't pay the money he owes at the bank, and the county is about to seize his land for back taxes. Jack makes what seems to be the only logical decision at this point and decides to get drunk.

He buys a jar of moonshine from a filling station operator named Smut Milligan. Smut's joint is on the outskirts of the small town of Corinth at the junction of River Road and Lover's Lane. Smut sells gas and a little food along with his bootleg whiskey. He also has some gambling going on in the back room and he pays off the sheriff who looks the other way.

Smut is an ambitious man, and over a drink he tells Jack that he's planning to open a road house and expand his operation to include a dance hall, tourist cabins and a real restaurant. He offers Jack a job as his cashier and, having no other viable prospects, Jack accepts the offer which includes room and board.

Any reader will certainly understand that a character who signs on with a guy named Smut has probably got a lot of trouble in his immediate future. Milligan will gradually entangle Jack in a variety of evil schemes and in classic noir fashion, Jack slowly sinks before our very eyes, taking one ill-advised step after another until he's finally in the jam of a lifetime.

It's hard to imagine how a book this good could have possibly been overlooked for nearly seventy-five years. Ross writes beautifully and completely immerses the reader in the sordid world he creates. He's particularly good at portraying the class distinctions that existed in a small, rural southern community at this time, and he's created a cast of believable and very memorable characters.

This is a book that will remind many readers of the stories of James M. Cain, particularly The Postman Always Rings Twice. Ross is certainly in Cain's league; his story is just as gripping, and he certainly deserves to be remembered along with the other of the best writers of his generation. They Don't Dance Much will certainly appeal to any reader who likes his or her crime fiction dark and dirty. Thanks to Otto Penzler, the Mysterious Press and Daniel Woodrell for bringing it back to life.
Posted by James L. Thane at 1:25 PM