Horror in the Heartland 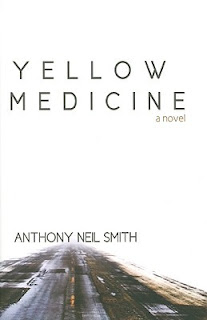 Sheriff's deputy Billy Lafitte sounds like a guy who might have stepped straight out of one of Jim Thompson's darker novels. (As though he had any light ones.)

Lafitte was a policeman in Gulfport, Mississippi, but because of his antics in the wake of Hurricane Katrina, he was booted off the force. His wife divorced him and took custody of their two kids, but Billy's now ex-brother-in-law, the sheriff of Yellow Medicine County in rural Minnesota, takes pity on Billy and hires him on as a deputy.

One might think that given a second chance and anxious to redeem himself in the eyes of his wife and children, Billy might straighten up and fly right. He chooses not to do so, and once in the frozen tundra, he reverts to the sort of conduct that got him kicked out of Mississippi. For example, he soon corrals the local meth cookers and dealers and, rather than shutting them down, effectively puts them under his thumb.

He also falls hard for a young girl named Drew, the lead singer of a local psychobilly band called Elvis Antichrist. Lafitte basically coerces Drew into having sex with him once but then falls hard for the girl and can't bring himself to force himself on her again; he'll only have her if she genuinely wants him.

That's not likely, since Drew is madly in love with a guy who's even a bigger loser than Lafitte. The love of her life is a small-time meth dealer and when he gets into trouble, Drew asks Billy to help the kid out. Billy agrees to do so in his own inimitable way and soon finds that he's stepped into a hornets' nest that seems to grow bigger by the moment, involving a snarky and ambitious federal agent and a group of bad-ass Malaysian terrorists who have targeted the American Heartland. Needless to say, the excrement hits the fan in a big way.

This is a very compelling book that immediately grabs the reader by the throat and then squeezes harder and harder until the climax. It's not a delicate little read; rather it's deliciously dark, nasty, brutal, gory and twisted. Just when you think Smith has reached a line that can't be crossed, he leaps over it and rushes full speed ahead.(Did I mention that the book was really gory?)

Cozy, it's not. But readers who like their crime fiction really, really dark will find that Yellow Medicine is the perfect prescription.
Posted by James L. Thane at 3:48 PM