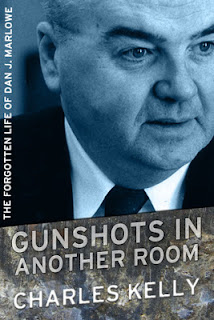 In this compelling biography, Charles Kelly chronicles the life of Dan J. Marlowe, a suspense writer whose career spanned the 1960s and '70's, but whose reputation has largely faded into oblivion in the years since.

As Kelly makes clear, this is largely unfair because in his heyday, Marlowe was a prolific writer who churned out a large body of work, published both under his own name and a variety of pseudonyms. Best known for his classic pulp novel, The Name of the Game Is Death, Marlowe also wrote a large number of short stories for a variety of magazines as well as a number of hard- and soft-core "adult" novels.

Marlowe became a writer somewhat late in life after supporting himself as a bookkeeper and professional gambler. But with the publication of Doorway to Death in 1959, he hit the ground running, and never looked back.

Marlowe's wife, Evelyn, had died in 1956, and after that he lived for a number of years in Harbor Beach, Michigan. A man of seeming contradictions, he was a hard-boiled writer of pulp novels that were brimming with sex and violence, and whose favorite sexual fetish involved spanking women with large bottoms. At the same time, though, he was also a conservative Republican who joined the Rotary Club and served on the city council.

He also formed a close friendship with Al Nussbaum, a bank robber who had once appeared on the FBI's Ten Most Wanted List. After Nussbaum wrote him a fan letter, Marlowe began visiting Nussbaum while Nussbaum was still in prison and was later instrumental in helping Nussbaum win parole. Later the two men would live together in Los Angeles, while Nussbaum pursued his own career as a mystery writer.

Tragically, while still near the peak of his career in 1977, Marlowe suddenly developed amnesia, perhaps induced by a stroke, and lost the memory of much of his past life. Shortly thereafter, he moved to L.A. with Nussbaum, who introduced Marlowe to several other L.A. area writers and attempted to jumpstart his career.

Sadly, it was not to be. Although Marlowe continued to work on small projects, because of his health problems, he was unable to put in the long sessions at the typewriter that were necessary to sustain the level of work he had produced before being stricken. He was able to publish only one more book before he died of a heart attack in 1986.

Kelly renders this story vividly and, in the process, he reveals not only the life of a writer who deserves to be better-remembered, but also a great deal about the life of many writers during this period who, like Marlowe, were enormously productive but who never broke through on a larger stage and who thus usually lived close to the edge financially. Like many of his contemporaries, Marlowe was always hoping to write the "big" book that would win him a larger reputation and greater financial success. Sadly, he was unable to do so, but now, thanks to Charles Kelly, he may finally get the recognition he continues to deserve.
Posted by James L. Thane at 4:36 PM