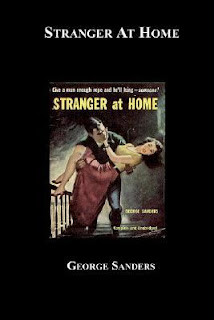 Leigh Brackett was known principally as a prolific writer of science fiction and she also wrote a number of screenplays. She worked on the screenplay for "The Big Sleep" and "Rio Bravo," among others, and at the end of her career worked on the screenplay for "The Empire Strikes Back." She ghost wrote this book in 1946 for the actor George Sanders. It's now been republished by Black Gat Books under Brackett's name.

The protagonist is a businessman named Michael Vickers. Four years earlier, Vickers disappeared in Mexico while on a fishing trip with three of his best friends. His body was never recovered and he has been presumed dead. Now, however, to the shock of virtually everyone he knows, Vickers suddenly returns on a night when his wife is throwing a party at their beach house.

When Vickers strolls nonchalantly into the party, he discovers that his wife has taken their boat out for a cruise. He makes himself at home and greets the three old friends with whom he had been in Mexico on that fateful night. He explains that someone hit him over the head and left him for dead. For a long time he lost his memory and had no idea who he was. During this period, he was effectively kidnapped and forced to work on a tramp freighter. He finally recovered his memory, made his escape, and found his way back home to California.

During his absence, all three of his "best friends," though married themselves, have been trying to make time with Vicker's very delectable wife, Angie. Vickers assumes that one of the three assaulted him in Mexico in order to have a chance with Angie. He also wonders if maybe his wife might have encouraged the attack.

Even before Vickers's wife returns to the party, one of the three men that Vickers suspects of attacking him turns up murdered, and Vickers becomes the principal subject. Is he a killer taking revenge? If so, does he have other targets in mind?

This is a very well done classic hard boiled mystery. Vickers is a very interesting protagonist, and the relationships that unfold between him, his wife, and the other survivors of the trip to Mexico are fun to watch unfold. More than seventy years after its original publication, this is still a book that fans of the hard boiled genre might want to seek out.