P.I. Philip Marlowe Searches for a Missing Wife in Another Very Good Novel from Raymond Chandler 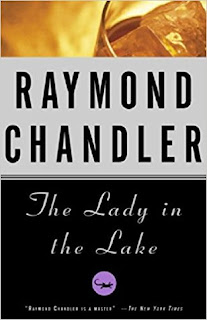 Raymond Chandler's fourth novel to feature Los Angeles P.I. Philip Marlowe involves two missing wives. One is the independently wealthy spouse of Derace Kingsley, an executive in a large firm. His wife, Crystal, who disappeared a month ago after sending him a telegram from Texas announcing that she was divorcing him and marrying her boyfriend, Chris Lavery, who has a reputation as a Don Juan.

Kingsley isn't particularly concerned about that. He doesn't really love his wife; he knows that she plays around, and he also knows that Lavery is one of her conquests. But then he happens to run into Lavery who tells him that he hasn't seen Crystal in a month and certainly didn't run off to Texas or anywhere else with her. Now worried, Kingsley hires Marlowe to find her.

Inevitably, of course, this will lead Marlowe into a complex series of events that's hugely convoluted, even for a Raymond Chandler novel. Several people will be murdered; some will be blackmailed. Almost everybody will lie to Marlowe, making his job even more difficult, and corrupt cops will keep beating him up and threatening to frame him for all sorts of crimes. But, as always, Marlowe will soldier on, irrespective of the odds, determined to root out the truth, even though he really doesn't like his client or virtually anyone else with whom he will come into contact on this case. It's his job, damnit, and he's going to do it the best he can.

As with practically any novel by Raymond Chandler, the plot is almost impossible to follow, but then nobody reads Chandler for his plots. Like the best of his books, this one is beautifully written in the spare, lean tone that set the early standard for hard boiled crime novels. This is not my favorite of Chandler's novels by any means, but it's still a very good read.