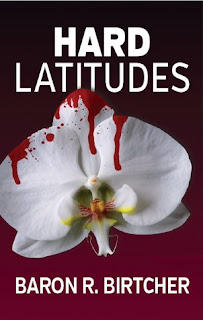 Hard Latitudes is another excellent thriller from Baron R. Birtcher. At the heart of the story is Mike Travis, scion of a wealthy family who turned his back on the soulless, empty life of wealth to become a cop in L.A. After leaving the police force, Mike has moved to Hawaii and bought a yacht, which he uses to ferry tourists on trips around the islands.

It's a laid-back, stress-free life, exactly what Mike desires, until one day he gets a call from his brother Valden, who desperately needs his help back in California. Valden is a total jerk--exactly the sort of shallow, privileged, self-absorbed clown that Mike was trying to leave behind. But Valden is Mike's brother, and so against his better judgement, Mike grabs the next plane back to the mainland.

Valden is the sort of guy who routinely cheats on his wife, but this time it seems that someone has taken video of him in a compromising situation with a girl who is most likely under age. The people who have the video are blackmailing Valden and threatening to make the video public if he doesn't pay up. This would be a major embarrassment, which would probably cost Valden his marriage. Perhaps even more important, Valden is heavily involved in politics as a fundraiser for a congressman, who is about to be feted at a major event. If Valden's situation becomes public, it might seriously compromise the congressman as well.

The congressman is a scumbag, and Mike Travis couldn't care less about him or his fat cat friends. But he does like Valden's wife and family and is anxious to protect them from the fallout of his brother's stupid mistake. Accordingly, Mike recruits a couple of friends from his days on the force and begins an effort to track down the blackmailers and put them out of commission. The timeline is short; the odds are long, and truth to tell, his brother probably isn't worth saving, but Mike will give it his best shot and put himself at considerable risk in the process.

It's a cleverly-plotted story with an appealing protagonist who carries his own share of baggage. The book moves along swiftly, and Birtcher excels at describing the settings, both in Hawaii and in L.A. It turns out to be a complex tale with lots of unexpected twists and turns--all in all, a very good read.