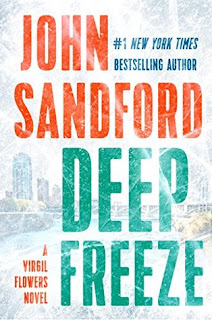 This is another hugely entertaining entry in John Sandford's series featuring Virgil Flowers, an agent of the Minnesota Bureau of Criminal Apprehension. Flowers usually works in the small communities of the rural parts of the state, and this case takes him back to Trippton, which was the scene of one of his earlier investigations.

In this case, a wealthy divorced woman was murdered in the wake of a committee meeting at her home. The committee members had been planning the 25th reunion of the Trippton High School class of 1992, and in a tiny town like this, high school pretty much lasts for the rest of your life. The friends and enemies you made and the rivalries and antagonisms that developed during those years simply continue to endure, and the only people who escape them are the ones who have sense enough to leave town and live somewhere else.

The reader knows who the killer is from the opening pages. Unfortunately, though, Virgil doesn't, and the search for the perpetrator will force him to dig deeply into the relationships, licit and otherwise, that bind and divide the citizens of Trippton and the class of '92 in particular. It will be an interesting journey to say the least.

There's also a hilarious subplot in which Virgil is instructed to assist a female P.I. from California who's trying to stop a case of patent infringement violating the rights of the Mattel corporation. A woman named Jesse McGovern is reconfiguring Ken and Barbie dolls into XXX-rated adult toys and distributing them over the Internet. The company has traced the source of the problem to Trippton and has sent the detective to serve a cease-and-desist order on McGovern. The problem is that everyone in town denies knowing Jesse McGovern and they are doing everything they can to prevent the P.I. from serving the papers. Virgil is not especially anxious to assist in this matter, but orders are orders.

As always, the book is a lot of fun and there are several laugh-out-loud moments. I was struck by one thing, though: Years ago, Sandford wrote a book in the Prey series, titled Winter Prey. As the title would suggest, the book took place in the middle of winter and Sandford's description of the winter cold was so brilliantly done, that I was shivering through the whole book. Other readers have made the same comment, and years later, I still feel cold every time I think of the book.

Deep Freeze also takes place in the middle of a very cold winter, and people are constantly bundling up, shoveling snow, and otherwise enduring the winter weather. But you don't (or at least I didn't) get nearly the same sensation of being out in the middle of the cold weather the way you did in the Prey book. Perhaps that's because while this book is mostly humorous, the Prey book was extremely menacing and thus even the weather came through as menacing. In any event, unlike the earlier book, this one, its title not withstanding, did not make me desperate to go in search of a giant hot buttered rum.