A Jockey/Photographer Finds Trouble in This Novel from Dick Francis 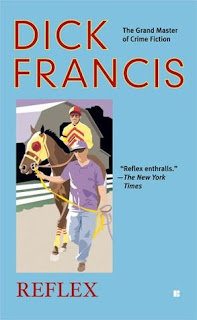 Philip Nore is a professional jockey and an amateur photographer, and it's the latter interest that gets him into trouble in this novel. Nore was acquainted with George Millace, a very good sports photographer who often frequented the race courses where Nore rode. Millace has recently died in an auto accident and then, to add insult to injury, someone has burglarized and trashed his house while his wife and family were attending his funeral.

There seems no larger significance to these incidents until someone returns to the house and assaults Millace's widow, demanding to know where the safe is. The poor woman has no safe and, as far as she knows, neither did her husband. But it's clear that Millace apparently possessed something that someone considers to be a potential threat. Given his occupation as a photographer, it's not a huge leap to imagine that he might have had photographs that could pose a threat to someone else.

Philip Nore steps in to assist the widow and in the process discovers what appears to be her husband's junk box. It contains some scraps of exposed film and other items that are not immediately identifiable. Curious, Nore begins to experiment with the items in his own darkroom, and once he does, he puts himself directly in the sights of some very dangerous people who will stop at nothing to protect their secrets.

This is a fairly typical Dick Francis novel and readers of the series will immediately recognize Philip Nore as the prototypical Francis protagonist. It's a good book, although not among Francis's best. In part this is because he spends a great deal of time in the novel describing the technical aspects of what Nore is doing in his darkroom to uncover Millace's secrets. Francis clearly did a lot of research in this respect and was apparently determined to get everything he had learned into the book. The problem is that is slows the pace of the novel, sometimes at crucial points, and the book would have been better if he had dealt with this material more concisely.