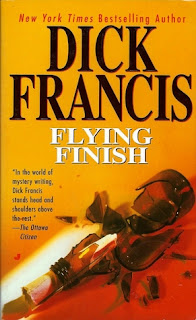 In this Dick Francis novel the protagonist is an amateur jockey. However, unlike most of Francis's novels, our hero spends very little time on horseback, and racing constitutes a very minor part of the story. Henry Grey is heir to a British title but would prefer not to be. The last child and the only son in his family, he was largely ignored as a child and developed into something of a loner with few social skills. He's happiest when he's piloting a small rented plane on his days off, alone in the skies over Britain.

Like many of Britain's noble families, Henry's has fallen on hard times financially. The massive family home is ancient and falling into disrepair. His parents and elder sisters expect Henry to do the right thing and marry some wealthy heiress who will bail out the family, but Henry wants no part of it and constantly avoids the young women that his mother keeps throwing at him.

He works in an office that arranges for the transportation of racing horses to countries near and far, but he's bored with that and so takes a job on the planes that actually fly the horses from one destination to another. The man who owns the company humors Henry by giving him the job, but he's sure that the titled nobleman won't stick it out for very long.

Obviously, though, the employer has never read a Dick Francis novel and doesn't know the kind of man he's really dealing with here. Like most Francis protagonists, Henry Grey is a quiet but very intelligent and capable man. He's also very determined and once he sets his mind to something, it's virtually impossible to change his course. Before long, Henry will discover that something very odd is going on in the horse transport business, and his discovery could well cost him his life.

Like most Dick Francis novels, this one is well-plotted and moves along at a brisk pace. The climax is riveting and if I have any reservations it's only because Henry Grey is not quite as interesting as the protagonists in most of the other books. Still, I enjoyed the book, and I'm sure that most Dick Francis fans will as well.