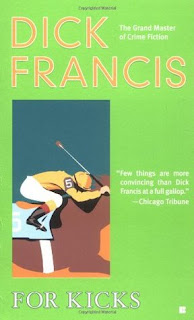 Daniel Roke owns a stud farm in Australia. He and his siblings were orphaned at an early age and Daniel, the eldest, has assumed the responsibility for raising his brother and two sisters, even though it means sacrificing his own dreams in the process. The farm is thriving, but it and the beautiful country in which it sits constitute a veritable prison for Daniel who yearns for other things.

Along comes a prosperous British Earl who is one of a handful of men who oversee the world of British horse racing. Someone is fixing races, but the Powers That Be are unable to figure out how the manipulation is being done, and the future of British racing may be on the line. The Earl hopes to hire one of Daniel's stable boys to go to England and provide intelligence by working undercover.

Sadly, the man that the Earl hoped to hire is clearly not up to the task, and the Earl shocks Daniel by asking if he would be willing to undertake the mission. Daniel's immediate reaction is to refuse, but as the Earl points out, Daniel's siblings are off at school and he can hire someone to run the farm while he is away. The Earl makes a financial offer that he believes Daniel could not refuse, but the Earl fails to realize that when Daniel accepts the job, he does so for reasons that have nothing to do with the money.

This is very much a typical Dick Francis novel, and Daniel Roke is very much a typical Francis protagonist--a stubborn, clever and intelligent man who will subject himself to any number of indignities and who will put himself in very grave danger if that's what's necessary to complete the assignment. It's a clever plot and the pages turn rapidly; any fan of the series will not want to miss this one.