P. I. Donald Lam Goes Looking for a Woman Who's Been Missing Since the End of World War I 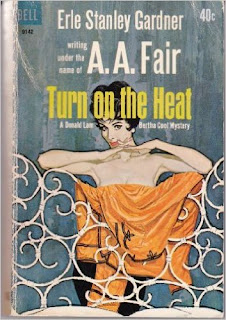 First published in 1940, this is the second book in the Donald Lam-Bertha Cool series written by Erle Stanley Gardner under the pen name, A. A. Fair. As the book opens, a man calling himself Mr. Smith hires Bertha Cool's firm to track down a woman named Amelia Lintig. Mrs. Lintig has been missing from the small California town of Oakview for the better part of twenty-two years. Mr. Smith seems to know very little about Mrs. Lintig, other than the fact that he wants Bertha to notify him as soon as the agency has found her. Bertha assures the client that Donald, her chief investigator, is a brainy little devil who will have no trouble tracking down the missing woman.

Donald drives up to Oakview and discovers that Mrs. Lintig disappeared in the midst of a local scandal that occurred shortly after the First World War. He husband, a prominent local eye doctor, ran off with his secretary and was never seen again. Mrs. Lintig filed for divorce, received a significant settlement, and soon thereafter disappeared herself. The trail is stone cold. But, as Bertha insisted, Donald is way smarter than your average detective and he's soon piecing together the elements of a very puzzling situation.

Any fan of crime fiction understands that when a guy walks into a detective agency claiming to be "Mr. Smith" and gives them a mysterious assignment, things are never going to be as they appear., and that's certainly the case here. Some bad people clearly don't want Donald poking around in Oakview; pretty soon someone is going to get murdered, and, as always happens in these books, Donald Lam is going to be up to his neck in trouble and headed off to prison unless he can pull a rabbit out of a hat in a big hurry.

This is, obviously, a very dated story, but it's a fun read and it's always entertaining to watch Donald Lam match wits with his adversaries. This book will appeal to anyone who enjoys the pulp fiction from the middle of the last century.