Crissa Stone Is Back and on the Run Again 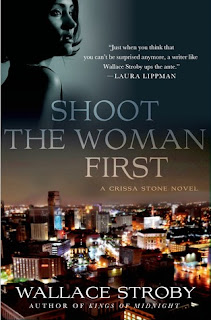 This is another excellent entry in Wallace Stroby's series featuring Crissa Stone. Stone is a career criminal and, as any number of people have suggested, she might well be the female version of Richard Stark's Parker. She's tough, smart and nimble--qualities that have served her well in each of her outings.

This story is set in Detroit and opens when an insider provides Crissa and her team with the low-down on the way in which a drug kingpin moves his money. There's a point where the money is vulnerable and Stone, working with three men, plans to relieve the kingpin of $500,000. Crissa has worked with two of the men before; the fourth member of the crew is a cousin of one of the two and a virgin who's pulling his first job.

The heist goes as planned, but everything turns to crap immediately thereafter. There's a firefight in which several people die and Crissa escapes with about half of the money from the job. Crissa was fairly close to one of the crew that didn't make it, Larry Black, and once safe, she figures that she has a moral responsibility to get Black's share of the loot to his family.

This will be way easier said than done because naturally the drug lord wants his money back and is hot on her trail. So is a corrupt former Detroit cop who's particularly good at tracking down bad guys and who would like to add the money from the robbery to his retirement fund. It all makes for a heart-pounding ride. Stroby writes a spare story that's stripped to the bones and moves at a breakneck pace. The characters are all well-drawn and Crissa Stone is a particularly engaging protagonist. One can't help but root for her, even though she is on the wrong side of the law. This is three winners in a row for Stroby and Crissa; I'm eagerly looking forward to the fourth.