The Informant, by Thomas Perry 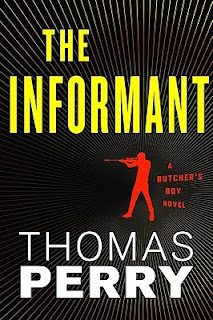 Thomas Perry's character, the Butcher's Boy, is one of my favorite characters in crime fiction. Sadly, the series in which he is featured encompasses only three books published over a span of thirty years.

The character, who first appeared in The Butcher's Boy in 1982, was orphaned as a tender youth and apprenticed to Eddie, a butcher who also happened to be an elite killer. Eddie trained his young ward well in both professions and as a young man, the Butcher's Boy was already making his mark as a talented assassin, best known for the gang hits he carried out.

After writing a great novel that introduced the character, Perry left him to his own devices for ten years while he (Perry) wrote a number of other books, most notably his Jane Whitefield series, which is also excellent. The Butcher's Boy then returned in 1992 in Sleeping Dogs. By then he was in retirement in England, but the mobsters he alienated before leaving the U.S. are still hunting him. A visiting mobster recognizes him and the Butcher's Boy must come out of retirement to deal with the problem.

Twenty years after that, still attempting to live a quiet retired life in England, he is spotted again. The mobsters are still after him and have raised the stakes, leading teams of hit men searching him out. The Butcher's Boy is now married and living as Michael Schaeffer. He's also not as young as he used to be, but to save himself and his wife, he must return to the U.S. and eliminate this threat at the source.

To do so, he enlists the help of Elizabeth Waring, a powerful official in the Justice Department. For thirty years, most of the analysts in the department have assumed that the Butcher's Boy was a mythical character and that the kills attributed to him were actually the work of several men. Waring has argued from the beginning that the man actually exists, but no one will listen to her.

The Butcher's Boy recruits her help by offering her a quid pro quo that she cannot refuse. Waring, in turn, sees a chance to recruit him as an informant whose testimony could virtually destroy the mob single-handedly. But she has an idiot political appointee for a boss who frustrates her at every turn and will not give her the support she needs to get the job done.

The result is a very clever novel in which The Butcher's Boy takes on the mob chieftains who want him eliminated while Waring defies her boss and attempts to bring him in. There's a lot of great action leading to the proverbial shattering climax at the end of a most satisfying read. Those who have not yet made the acquaintance of the Butcher's Boy might well want to start with the first of the three books, but those who have read the first two will almost certainly agree that the twenty-year gap between the second and third books was well worth the wait.
Posted by James L. Thane at 5:03 PM