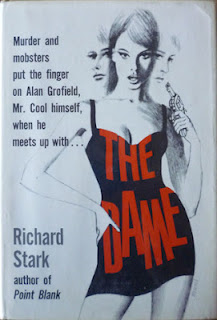 Alan Grofield first appeared as a character in Richard Stark's excellent series about Parker, the tough-as-nails heist man. Grofield, whose day job was as an actor in small, regional theater groups, moonlighted as a very competent thief. Parker could always depend on Grofield when the two worked together, and Grofield was one of the very few members of the crew that Parker (and the reader) knew would never be the one who screwed things up.

Stark (Donald Westlake) ultimately liked the character well enough to give him four books of his own. This is the second of the Grofield novels, first published in 1969. Grofield is much more relaxed than his more famous (or infamous) counterpart. In twenty-five novels, Parker probably never cracked a single smile. But Grofield is a very witty guy, which sometimes gets him into trouble, and he will often use humor in an attempt to defuse a tricky situation. One could never imagine Parker doing that; he'd be much more likely to get out of trouble by smashing a sledgehammer into some guy's forehead.

As a result, the Grofield books are a bit lighter than the Parker novels, but they're certainly very enjoyable in their own right. In this case, Grofield and Parker have just finished heisting the profits of a casino, and Grofield finds himself in Matamoros, Mexico, enjoying the company of a delightful young woman before heading home to his wife. He receives a message asking him to go to Puerto Rico as a favor to a friend to help out a woman in distress.

Curious, Grofield flies to Puerto Rico and meets the woman and her several houseguests at an isolated mansion out in the countryside. Grofield and the lady immediately annoy each other and he decides not to take the job. However, before he can leave someone in the house is murdered. It's clear that the killer must have either been a guest or a member of the staff, and Grofield is everyone's number one suspect.

As is usual in a case like this, the only way Grofield can save himself is to find the real guilty party. This is, in some ways, a variation on the old English manor murder mystery, and in that case, of course, someone like Miss Marple or Hercule Poirot would produce the solution and save the day. Happily, neither Miss Marple nor the famous Belgian are among the guests and so the task falls to Grofield whose approach to the problem is a lot more fun.

Readers who have enjoyed the Parker series will doubtless like this book as well and will be grateful to the University of Chicago Press for resurrecting this and two of the other Grofield books. (The fourth, The Sour Lemon Score, was recently republished as part of the Hard Case Crime series.) Who could not love a book that contains a paragraph like the following:

"Eva Milford was an overwound mainspring. Her hairdo was so tight and rigid it looked as though it had been set by the Spanish Inquisition. Her torso didn't look girdled, it looked petrified, like an old forest. Her dark-brown suit and fussy coral blouse made her look like the mean old broad in the steno pool, and her face was as shut up as a bank on Sunday."