Donald Lam Tries to Save the Marriage of a Wayward Conventioneer 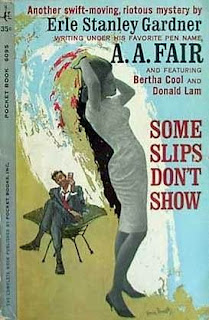 Barclay Fisher may have been indiscreet. He isn't completely sure though, because he went to a convention in San Francisco, got really drunk, and woke up the next morning on the couch in an apartment belonging to a gorgeous young babe named Lois Marlow. Barclay may or may not have been unfaithful to his wife in the strictest sense of the word, but the technicalities won't matter all that much to his wife, who apparently has no sense of humor about these sorts of things. If she finds out that Barclay spent the night in Lois's apartment, it will probably be "Adios, Barclay."

Unfortunately, someone has threatened to send a letter to Mrs. Fisher, detailing how her husband spent his time at the convention, when he was supposed to be selling boats. Barclay offers Bertha Cool and Donald Lam five hundred dollars (no small sum in 1957) to get him out of this mess.

The firm agrees to take the case, which appears to be a fairly straightforward instance of blackmail. Donald flies to San Francisco and meets with the lovely Lois. There he discovers that something altogether different may be going on. Naturally, someone is going to get killed before all of this is over, and equally inevitably, Donald Lam will be up to his neck in trouble and may be headed to jail before all is said and done.

This is another solid entry in this entertaining series, and as always it's fun to watch Bertha and Donald spar with each other while Donald tries to pull all these chestnuts out of the fire. If you're curious about this series, this would be a good one to sample.